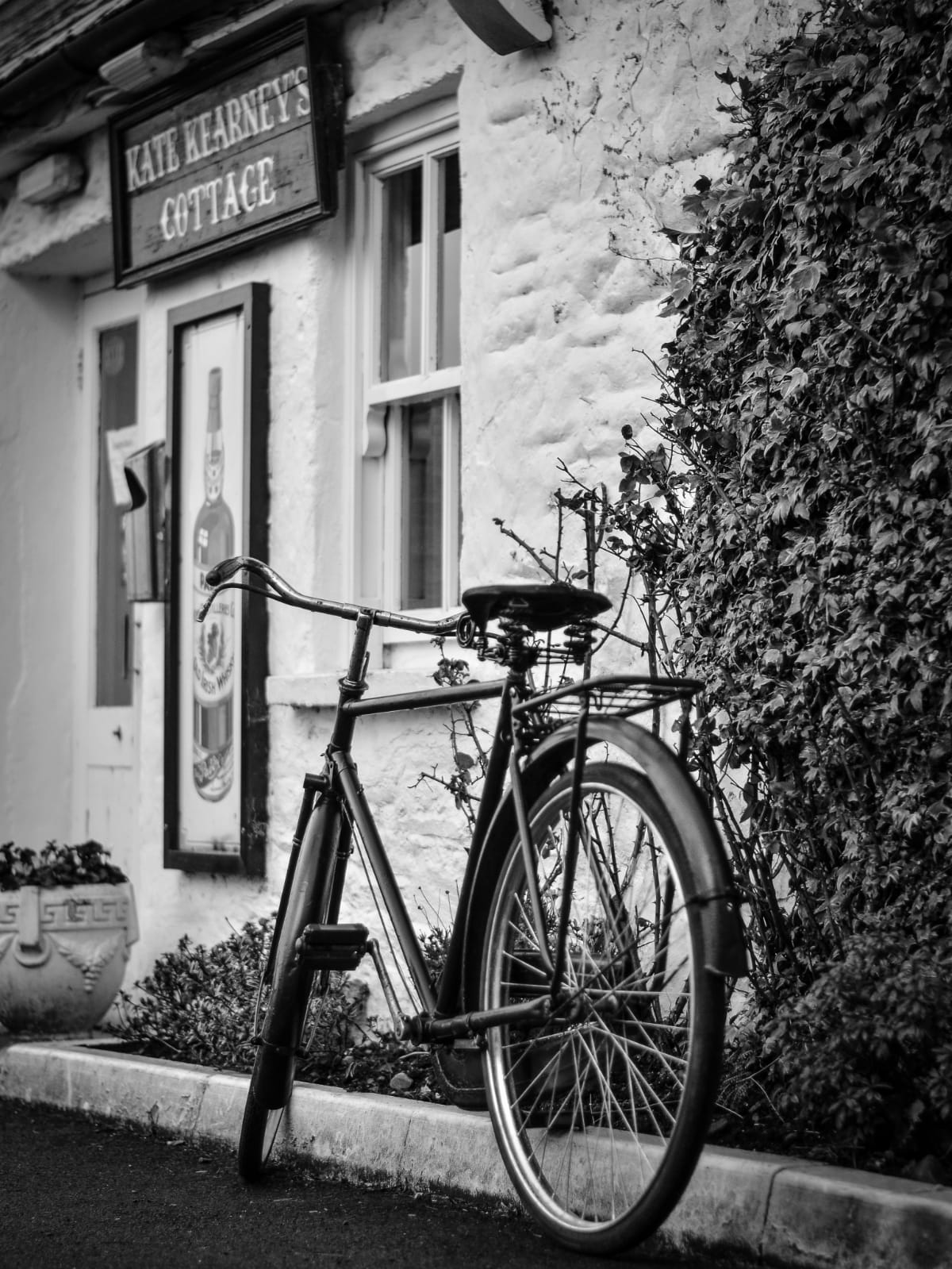 The History of Kate Kearneys Cottage

Kate was a well known beauty in Ireland in the years before the Great Famine (1845-1849). The legend of Kate has captured the imagination pf people far and wide down through the years. It was at this síbín that Kate distilled her famous poitín, 'Kate Kearney's Mountain Dew', which was "very fierce and wild, requiring not less than seven times its own quantity of water to tame and subdue it." It was of course illicit. However, Kate flouted the law and invited the weary traveller to partake of her hospitality.

Pictured here are Julia Burke and her husband Donal Mór Moriarty who lived in Kate Kearney's Cottage in the middle of the 19th Century. She and her husband are the first to be documented after Kate herself. They are Jim Coffey's (the current owner) Great Great Grandparents. 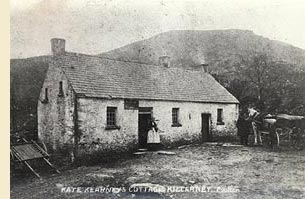 Among the many characters who lived in the Gap of Dunloe was the famous Patrick Boyle, the bugler. This exerpt from 'Empire News' describes the man: "In a defile in the hills of Kerry is Sir Echo himself...78-year-old Patrick Boyle, the bugler who wears no uniform. Into his seven-mile valley of echoes, the romantic Gap of Dunloe, come thousands of visitors from all lands to ride under towering cliffs and hear the magic bugle.
For more than 60 years Patrick has 'blown the echoes' for millionaire and honeymooner. His father before him made the valley echo for Queen Victoria. Unlike most buglers, he lives unsurrounded by precise barrack walls and men in uniform, he lives alone. But the bugle he blows these days was the gift of a soldier in 1948: a thoughtful gesture by Lieutenant-Colonel G Down, RA whose name and Paddy's are inscribed on the much-dented instrument that wakes the valley.

In 1849 Dónal Mór began to build a home for himself and his wife, Julia Burke from Beaufort, and their three young children.  He built it across the road and a little to the north of his parents’ house.  After some conversations with his landlord, Dónal O’Mahony, justice of the peace and high sheriff, Dónal Mór decided to open a shop and public house, and O’Mahony soon provided him with a spirit and beer licence.  Later, Dónal and Julia called their home ‘Kate Kearney’s Cottage’.  The eponymous Kate lived in the late eighteenth century.

No one now (1888) living remembers to have seen this person, who is reputed to have been strikingly beautiful, to have sold potheen to tourists, and to have died about the beginning of the present century.  Her house, levelled long ago, was near the slate house ‘Kate Kearney’s Cottage’ where Donal Moriarty now holds a spirit licence &c., and Mrs D. M. has adopted ‘Kate Kearney’ as a kind of trade-mark.

In 1849, Kate was already well-known in song and on stage.  Lady Morgan (Sydney Owenson, Dublin) wrote the ballad ‘Kate Kearney’ around 1800 and sang it to an old Irish tune.  She performed it herself in her 1807 play ‘The First Attempt’ in Dublin:

While her eyes are so modestly beaming,
You'd ne'er think of mischief she's dreaming:
Yet oh, I can tell
How fatal's the spell
That lurks in the eye of Kate Kearney.

O should you e'er meet this Kate Kearney,
Who lives on the banks of Killarney;
Beware of her smile,
For many a wile,
Lies hid in the smile of Kate Kearney.

Tho' she looks so bewitchingly simple
There's mischief in every dimple;
And who dares inhale
Her mouth's spicy gale,
Must die by the breath of Kate Kearney.

In 1811, not long after this song appeared, John Lee Lewes, a memorable Englishman living in Manitoba, published, in his book Poems, ‘An Answer to the Celebrated Ballad of Kate Kearney’:

Oh, yes, I have seen this Kate Kearney,
Who lives on the banks of Killarney;
From her love-beaming eye,
What mortal can fly,
Unsubdued by the glance of Kate Kearney;
For that eye so seducingly beaming,
Assures me of mischief she’s dreaming,
And I feel ‘tis in vain
To fly from the chain,
That binds me to lovely Kate Kearney.

At eve, when I’ve met this Kate Kearney,
On the flower-mantled banks of Killarney,
Her smile would impart,
A sweet joy to my heart,
As I gazed on the charming Kate Kearney;

On the banks of Killarney reclining,
My bosom to rapture resigning,
I first felt the smart
Of love’s fatal dart,
And the soul-soothing sigh of Kate Kearney

William Collier (1795 – 1871) wrote his play ‘Kate Kearney or The Spirit of Killarney’ c.1836 and that had already been performed in Ireland and in England when James Love, a young Yankee soldier, camping with his regiment near Nashville, Tennessee in 1862,  writes how, while waiting for a fight with the enemy, he saw ‘Kate Kearney, a musical by Collier’.[i]  One year later the play was performed in New York.

James Joyce was familiar with Collier’s works, one of which, a History of Ireland for Schools (1884), was included in his library in 1920, and it has been suggested by some critics that in his story A Mother, from Dubliners, he drew his Kathleen Kearney from Kate of the Gap.  Kathleen was a talented accompanist and singer with a controlling and bombastic mother.  When he wrote that Kathleen’s mother ‘determined to take advantage of her daughter’s name’, he was referring to the enigmatic Kate Kearney of ancient song and story, and to the mystery, beauty and wildness of faraway Kerry, characteristics that were completely lacking in his Kathleen who was ‘as innocuous as an after-dinner mint’ and who would ‘never inspire the magic nor cast spells as Kate did’.[ii]  Mr Joyce was using poor Kathleen to reveal the unromantic reality of Irish middle class life in the Dublin of 1914.  As time went by Kate Kearney and her cottage gained world renown and several years ago, in a cold grassland-wet yurt in Mongolia, sitting near a greasy dead animal on a spit over the equally dead ashes of a faded fire, this writer overheard the following from one of a group of Canadian fellow travellers: ‘What I’d like now is an Irish Coffee from Kate Kearney’s Cottage’.

The O’Mahony used to bring his guests to the cottage for beverages after their outings at the Gap, and the shop, which sold the few essential items which could not be home produced, was also of benefit to the local population.  An early book of accounts shows that the following were on sale: oil, penny candles, soap, polish, starch, penny laces, sugar, salt, tea, bread and bread soda.[iii]  Some people were also buying milk and butter – not everyone had a cow.  An order of four lemons for Beaufort House in early 1913 must have been unique as lemons were scarce in Ireland in those days.  The shop also sold a few souvenirs for the tourists whose numbers were increasing by the year; Connemara marble, bog oak, and lace and linen from the convent in Killarney. 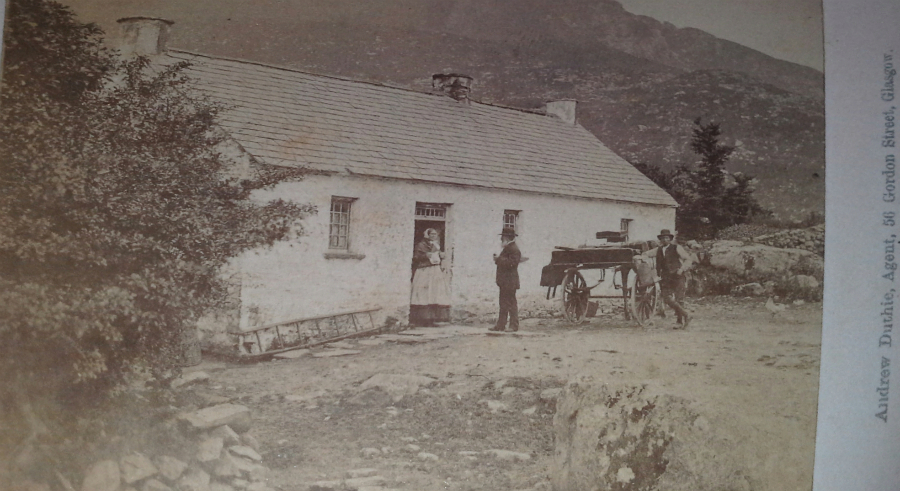 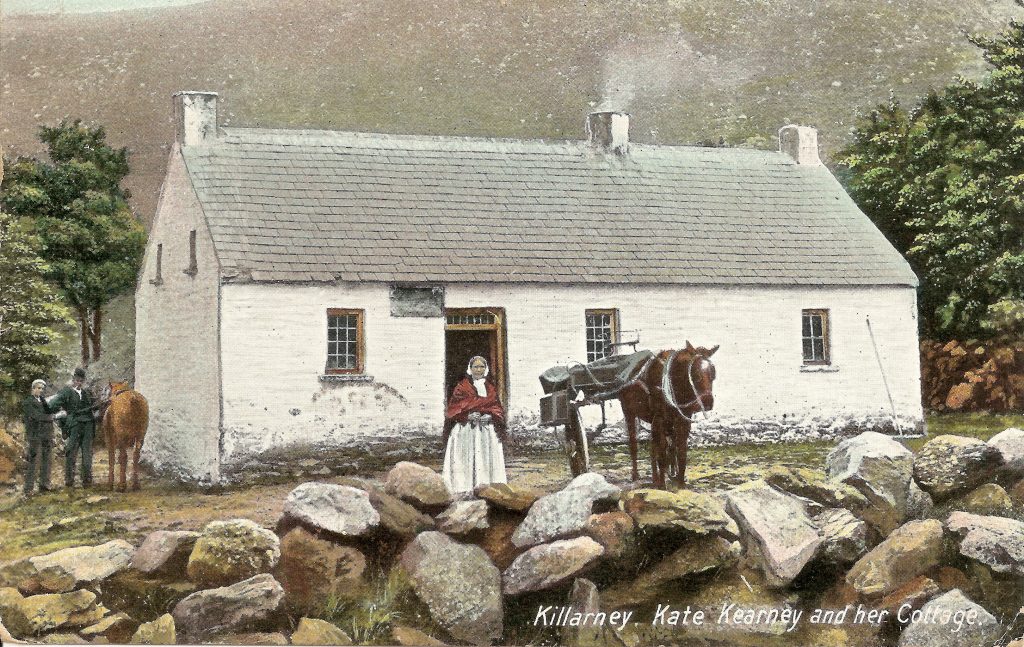 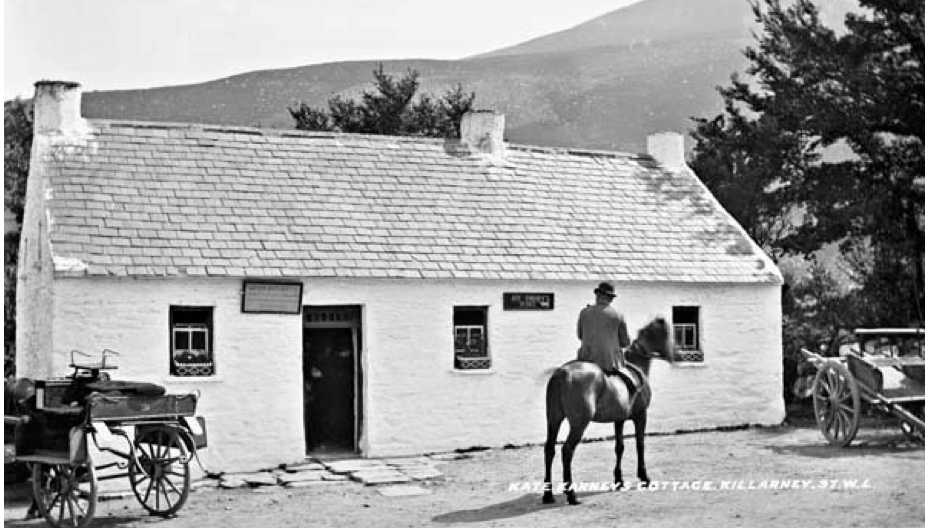 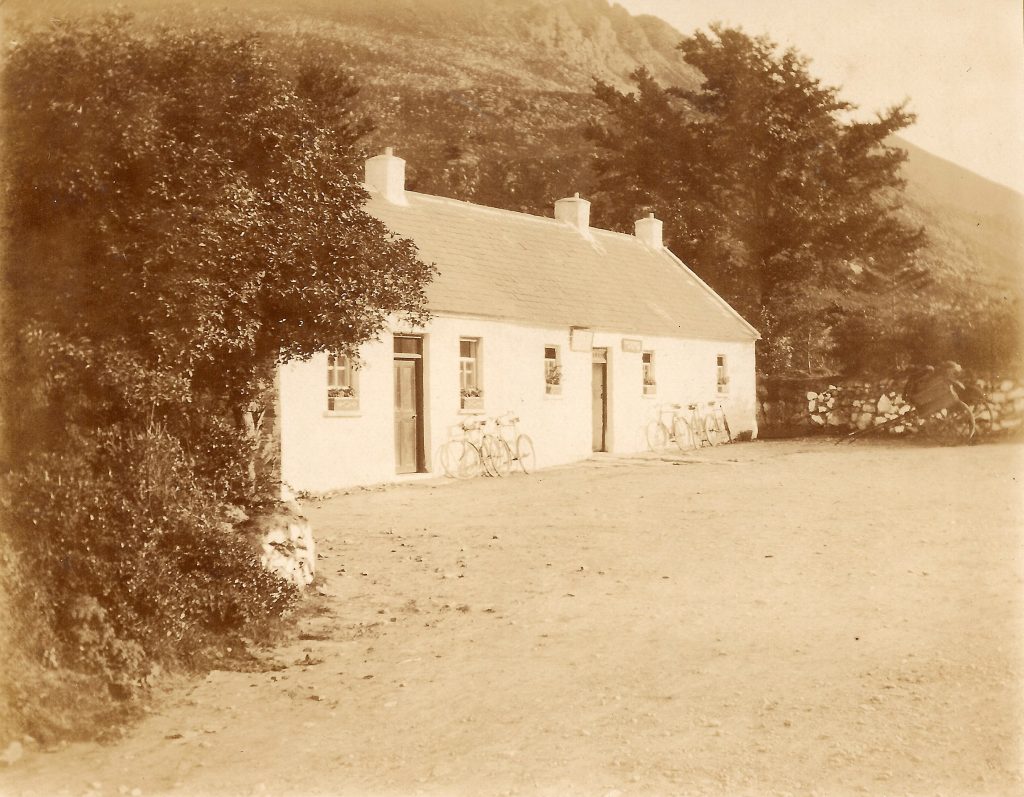 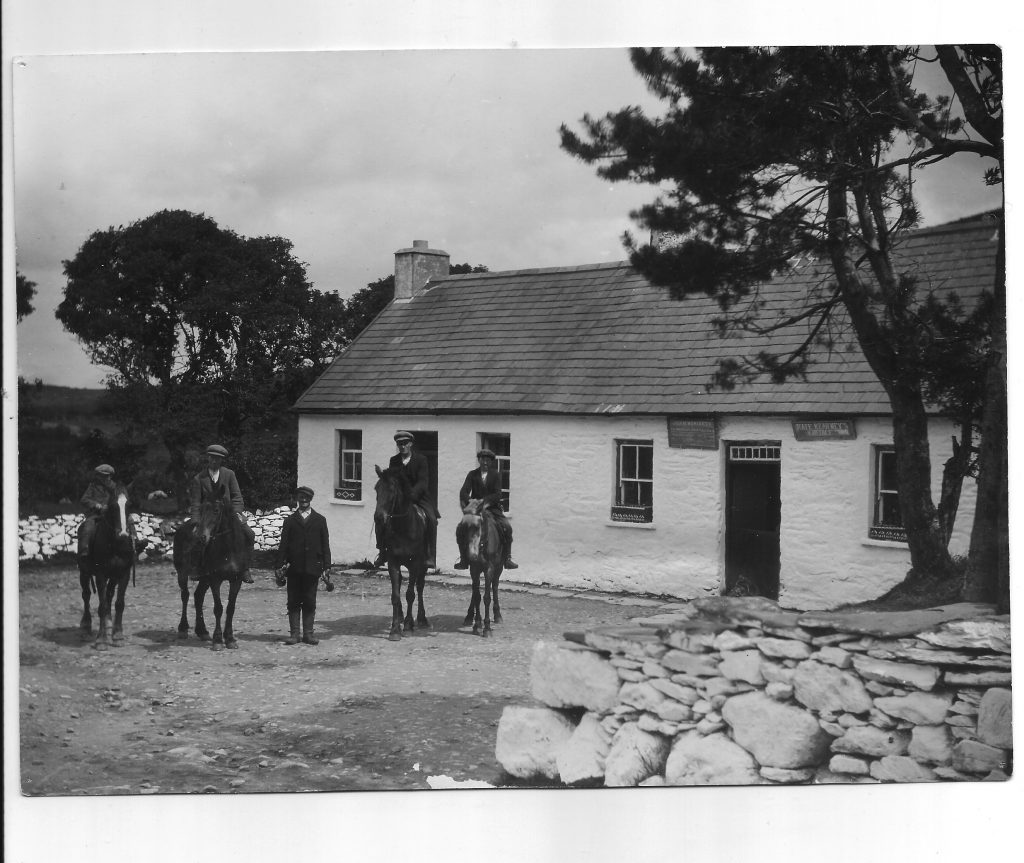 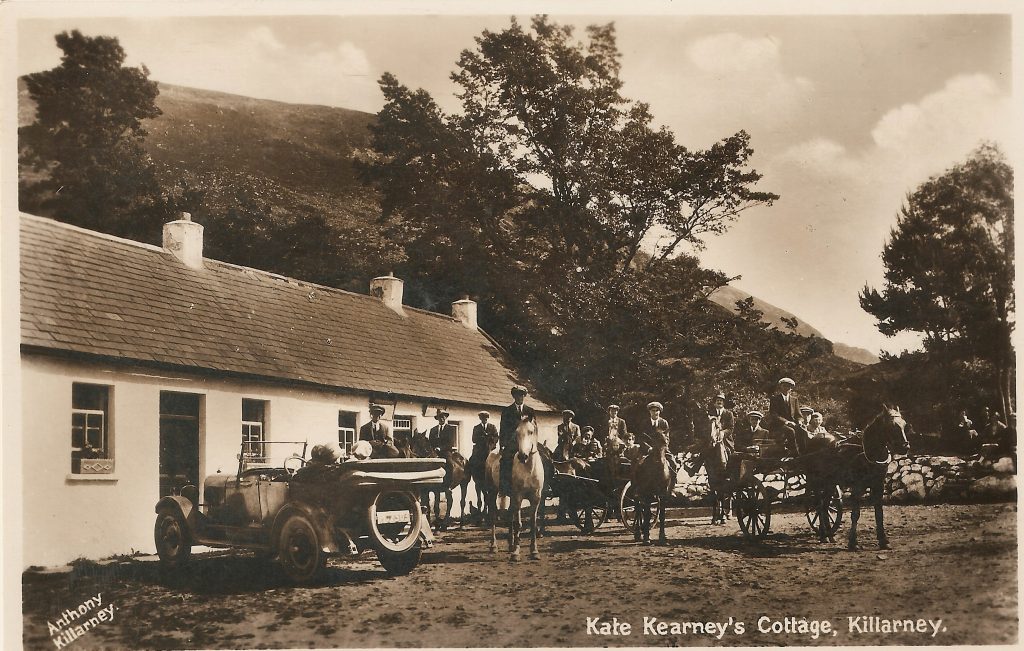 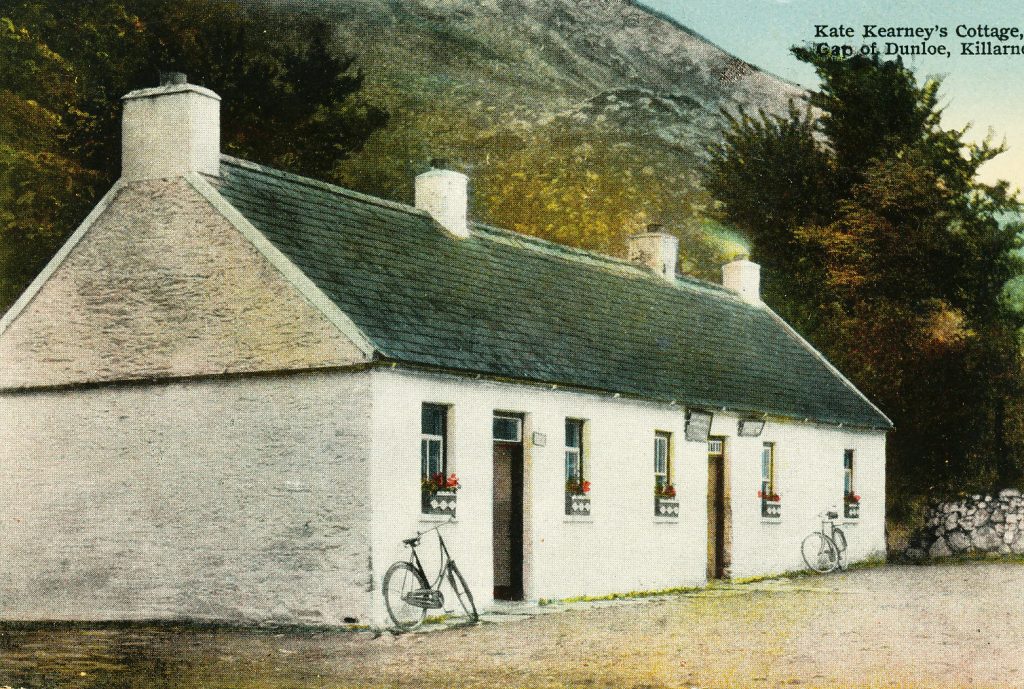 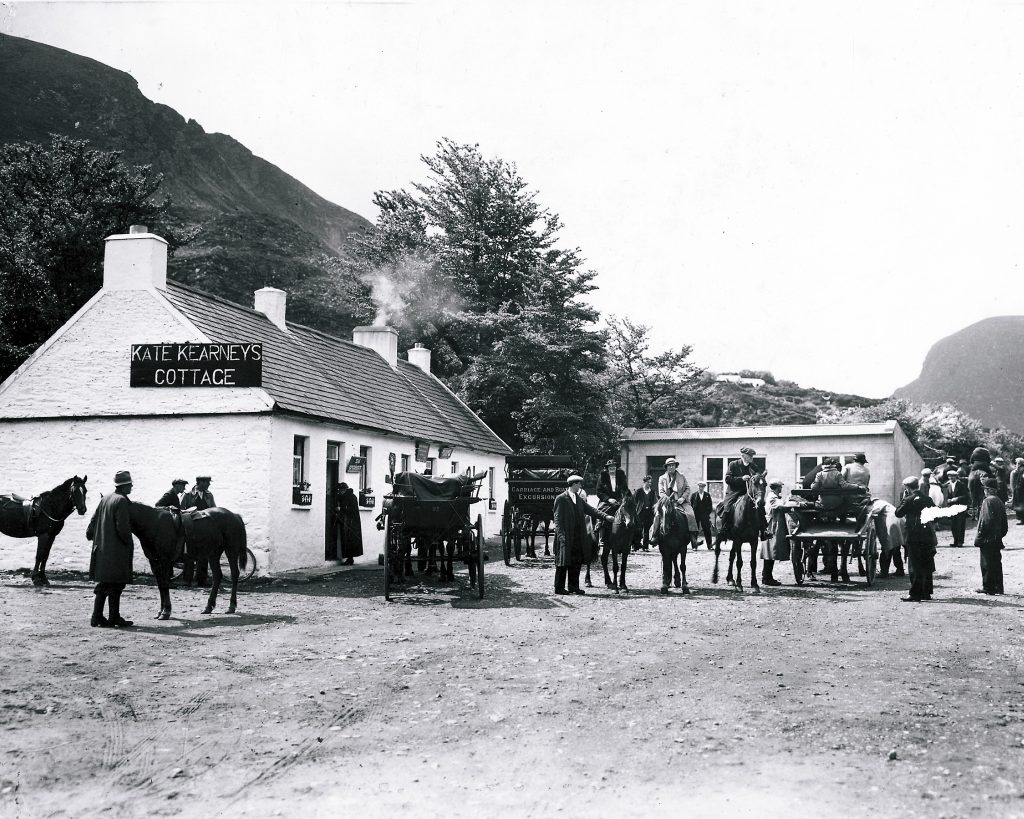 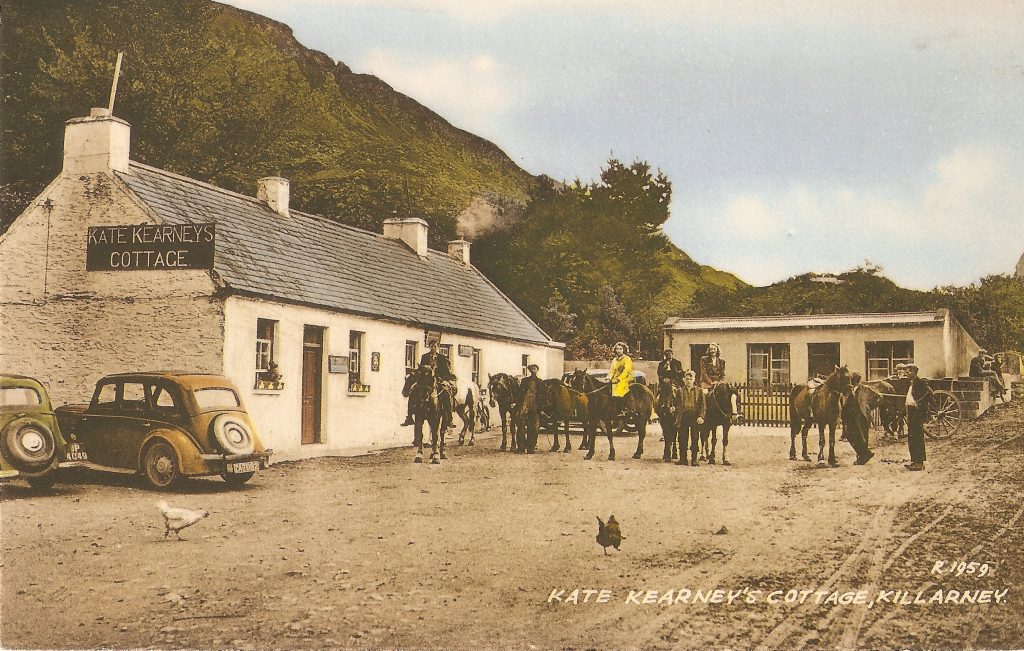 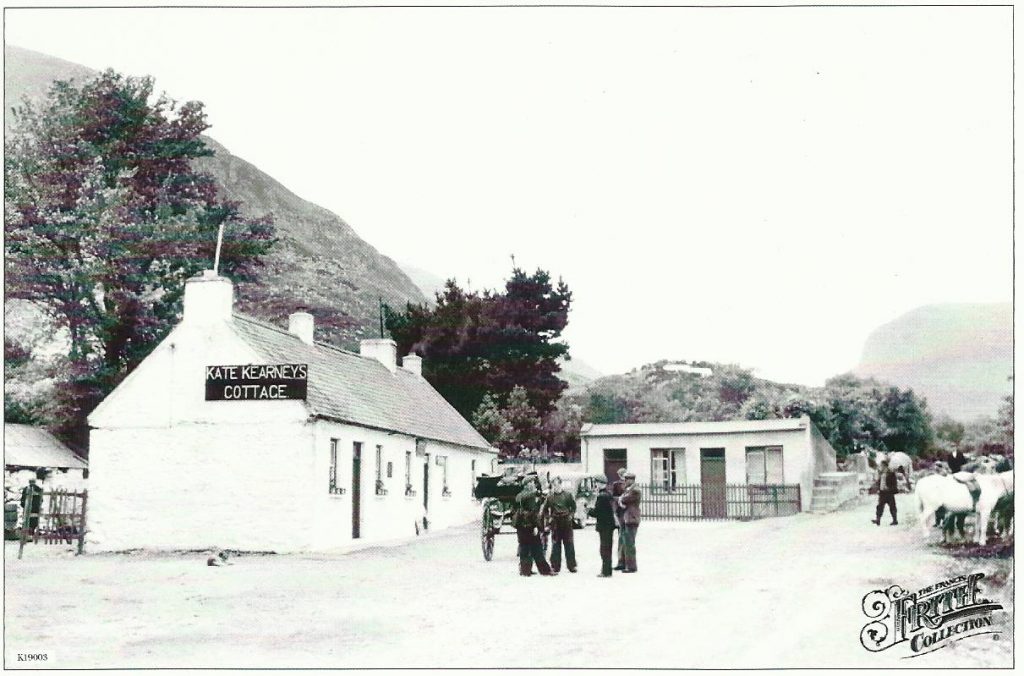 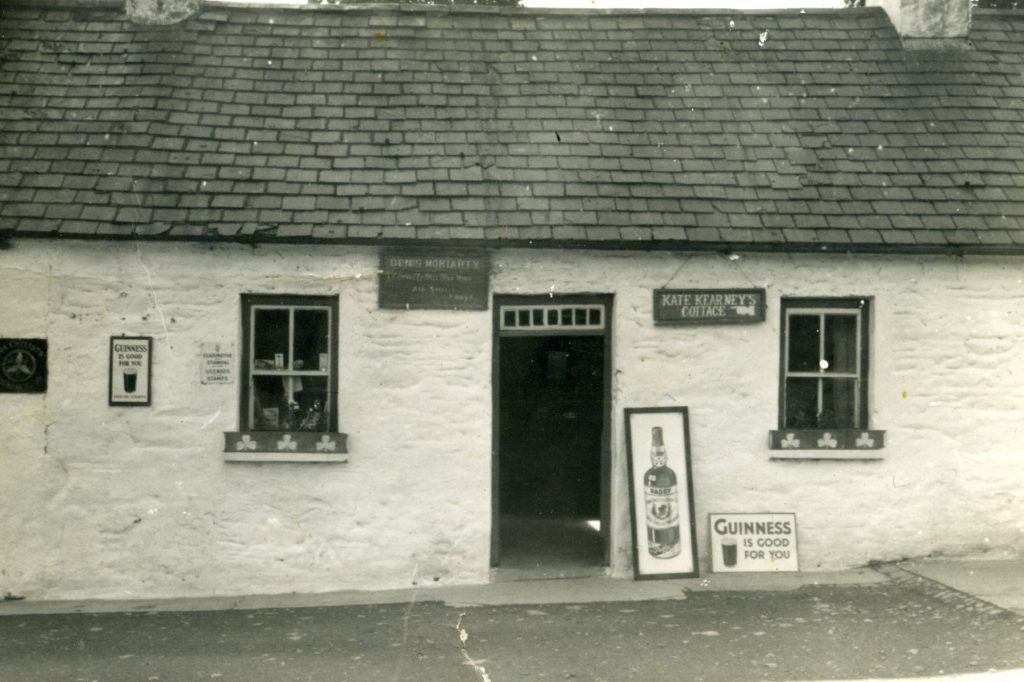 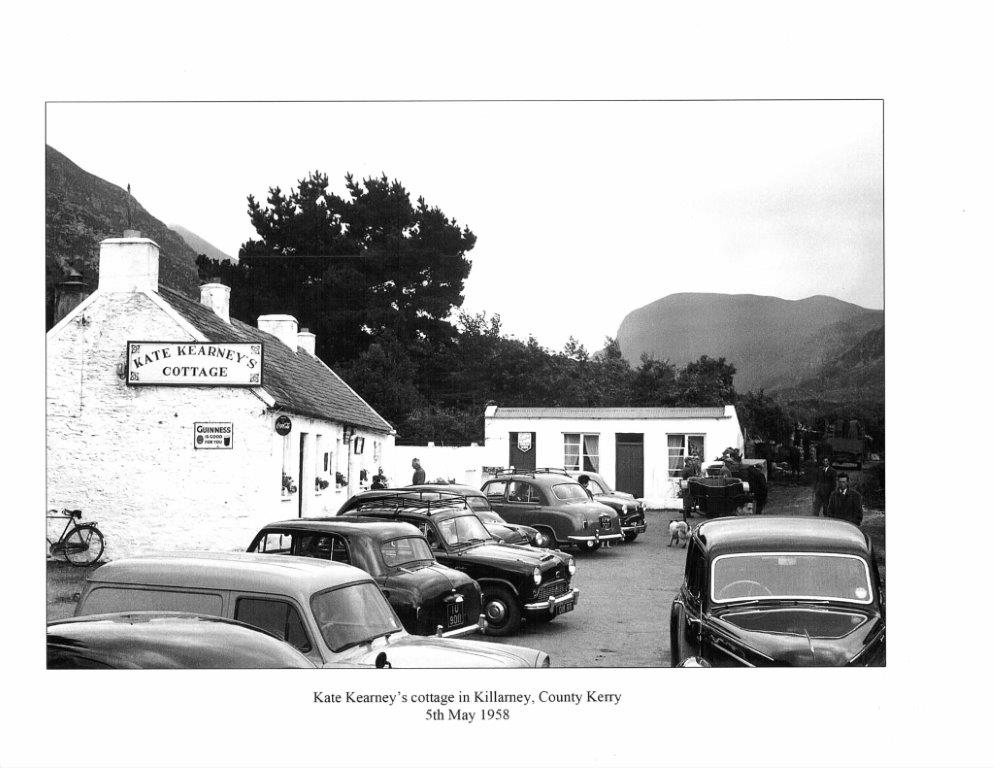